It’s been a long week. I am sitting at home with not a lot to do. I figure, I figured I’d watch a sports movie and keep a little journal with my drunk thoughts about it as the film progresses. I decided to fire up the Blu-Ray player and watch Rocky V. Yes Rocky V. You might be wondering why I would willingly decide to watch what is no doubt the worst movie in the series.The truth is I planned on watching Rocky IV but I was already a little tipsy and I suck at reading Roman numerals. By the time I hit play and realized I picked the wrong disk I was too lazy to get up and correct it so I just decided to deal with it. The movie sucks but it honestly wasn’t as bad as I remembered.

(Drink # 1 – wine)  Rocky is in the shower after beating Drago and oh no! Something isn’t right! By the way he is standing he looks like he is about to have some type of miscarriage. Poor champ. I love how he comes home from Russia and his kid has magically aged about 5-years (they must have hit a time warp) and is now being played by his real life son. Oh and who was watching this kid anyway while mom and dad where with the communists? Talk about shittie parenting and why isn’t Paulie’s robot from Rocky IV there also!? A few minutes in and this film already blows. Oh great! Hear comes the Don King of the movie ‘Duke’. We are just banging on all cylinders now!
(Drink# 2 –Wine). I need to kill this wine and move onto something stronger if I am going to make it through this movie. Ok they just got back to there mansion, which by the way isn’t the same house from the last movie. Sly just tucked his annoying kid into bed and told a stupid joke. Adrian is yelling at Paulie because it turns out the stupid alcoholic signed “power of attorney” over to his accountant and spent it all on bad business deals, which was probably hookers and blow. Rocky must have brain damage worse than I thought because if someone screwed me out of millions I would kill them! He seems to forgive Paulie and forget quickly. HAHAHA they are going to lose the house also. It turns out the accountant hasn’t paid Rocky’s income taxes in six years. Way to keep tabs on your finances Rocko!
(Drink# 3 – Sam Adams) Life is good. I guess in this movie world when you screw someone out of millions of dollars you don’t need to worry about getting sued. Life just seems to go on because I don’t think it is ever mentioned again in the film. No mention of law suits or anything! Everything in Rocky’s home gets auctioned off. That probably included Paulie’s robot. Rocky is now moving back to the shittie old neighborhood in Philli. Rocky wants to take Duke’s offer to fight but can’t because of his brain damage.
(Drink# 4 – Sam Adams) Adrian just got her job back at the old pet store. HAHAHAHA! I would like to seriously know why when they wrote the first film they decide his love interest would work at a pet store. I have always thought of pet store employees as either kinda slow or potential serial killers who work with animals in an attempt to suppress homicidal rage. It’s not even a good pet store! It’s sketchy looking at best and I bet they have the kind of animals that would die after a week and look like they have been prancing around the Chernobyl Nuclear Plant. This place needs to be shut down and the humane society contacted stat!!
(Drink# 5 –Sam Adams) I guess Rocky can still keep Mickey’s old gym. He starts training fighters. On the street one day Rocky meets ‘Tommy Gun!’ who looks so desperate to train with Rocky that he would probably suck him off if Rocko requested it. Be careful though Rocky. He has the AIDS. No seriously he just died from it in real life,
(Drink# 6 – Captain and Coke)  Meanwhile, Rocky’s kid is having trouble adjusting to the thug life. The poor baby has to go to public school and even worse he gets mugged by two idiots. One of them takes his coat (he did you a favor kid) and looks like a butch lesbian. You would think the son of Rocky Balboa would know how to throw a punch but no. He has been spoiled his whole life and his dad didn’t teach him anything. 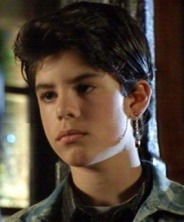 It looks like him getting his ass kicked got him some sympathy from a chick who is hanging out with him out of pity though. Take it anyway you can get it right?
(Drink# 7 – Captain and Coke) Rocky and Tommy are officially besties and having a sleep over. His son is feeling neglected and is training with Uncle Paulie to take on the bullies. Rocky doesn’t care. The booze is definitely starting to set in with me right now. I know this because I am looking at Adrian and while I still “wouldn’t” the fact that I’m thinking about it means something is going on in my brain and the beer goggles are starting to set in. Tommy starts winning fights. Rocky’s kid wins in his fight and gets his gay ass coat back and becomes friends with the bullies. Still, Rocky doesn’t care. Duke convinces Tommy that Rocky is holding him back and should get a shot at the title. Somewhere along the line this red headed chick starts hanging around Tommy more. She annoys me for some reason. I bet Sly was banging her at one point and gave her this role in the movie. I really hate red heads but that’s another story.
(Drink # 8 – Captain an Coke!) Rocky’s son is fed up with him and runs off with his gay looking pirate earring and new badass posse. Tommy fired Rocky as his manager and sides with Duke because he feels like he should get a shot at the title. Now  Rocky decides to care about his son. He finds him out on a street corner while he is smoking a cigarette (total badass)  Everything is all happy clappy again. Everyone in the Balboa household is huddling in the Asbestos filled basement and watching Tommy’s championship fight. Tommy wins but in his thank you speech he doesn’t thank Rocky. The crowd boo’s him. Oh ya at some point in this his son draws Rocky some stupid picture of him as a champion. Rocky does his best to pretend he likes it.
(Drink # 9 – Miller light tall boy) Ohh boy Tommy showed up at the bar that Rocky is hanging out at all jacked up and challenges him to a fight in the ring. He feels its the only way to escape Rocky’s shadow. Rocky won’t do it. Tommy then punches Paulie. Oh no he didn’t!! Rocky is mad. AWWW Shiiiit this is going into the street! 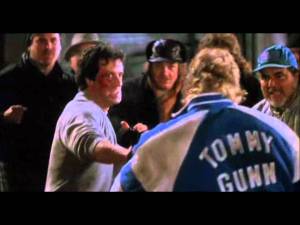 It says something about a person when they have there name in big letters stitched onto there jacket. Kick his ass Rocky!

A crowd is huddling around. Rocky does some sort of weird brake dancing take down move and get some good shots in but Tommy starts beating the hell out of Rocky. Cue the flash back of some encouraging words from his dead trainer Mickey telling Rocky to get up. Of course Rocky wins the street fight blah blah blah The next day Rocky who is now father of the year gives his son the cufflink that Mickey gave to him. Pffft we all know he would have given it to Tommy though if he stuck around. – The End –

– Rocky not fighting in a boxing ring