In memory of their dead friend, four college buddies embark on a hiking trip in Sweden. After getting lost, the group runs into some serious complications as nightmares haunt them, & a creature stalks them.

A group of old college friends are lost in the woods (check). They are trying to reconnect this friendship after a friends death. (check) One friend is harboring some animosity towards another friend for something he did in the past & it might finally bubble to the surface (check). Someone gets injured & it slows the group down (check). Something, or someone is stalking them, & they need to survive (check) As you can see, this movie brings nothing new under the sun. However, it manages to do these things well!

I like the characters in this film. They aren’t the cliche young party goers looking to drink in the woods. They’re well into their thirties & feel real. While I did feel like the dialogue was ‘off’ at times, their actions & reactions seemed authentic in most scenarios.

The situations they face, lead to a lot of bizarre questions that do a great job at building suspense, fright, & curiosity. Why are deer circuses in the trees? Why does this abandoned cabin contain a witchcraft like alter? Why are we all having disturbing dreams? Why do I have these wounds? Obviously, it all amounts to something. 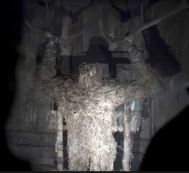 I don’t care if it’s raining outside. If I see a weird statue in a cabin, I’M OUT!

The creature design in the film is something I really applaud. It’s really cool! Plus, I give them credit for not showing it too much until the end. It’s too often that films give us a good glimpse too early. I hate when that happens. You always want to know what it looks like, but when you show it too much, it definitely starts losing the fright factor. I’m glad this film didn’t hit this pitfall. It knows the perfect time to really bring this thing out in full stride. Also, the imagery can be a bit disturbing at times, but doesn’t throw gore at you for the sake of doing so.

Unfortunately, the ending is a bit abrupt & disappointing. Although, I feel like I can let this slide since it does succeed in making its point.

In an ocean of horror movies on Netflix, this is one of the decent ones that is worth a watch. Sure, it doesn’t reinvent the wheel, & the ending might seem unsatisfying, but it successfully creates a sense of fear and curiosity that will keep you watching.

+ Doesn’t give us a good look at the creature too early.

-Ending could have been better.

Like Loading...
‹ Dad who took Viagra gets penis broken after son jumps on him in bed for morning hug.
Man tried to win back ex-fiance by posing as her mother’s ghost. ›