In India, a man filmed himself cheating on his wife. He then sent it to his wife and in-laws. He did all this to prove that he isn’t impotent.You know that guy who takes things to the extreme in order to prove a point? Well, this guy just lapped him on the race track.

That’s the reason he sent the video, but how should we interpret this?  In my mind, it’s like saying “f*ck you! It’s you who makes me impotent.” However, because of the in-law factor, this could have also been his way of showing her and family that he’s capable of giving her children & satisfying her.  It was reported that their marriage was already on the rocks. This could have been an extreme last ditch effort in an attempt to reconcile. If that’s the case, this is probably the most extreme example of a good intention, but stupid idea. Plus, the video doesn’t prove he’s not impotent. They have drugs for that now. All it really proves is that he’s an idiot.

I have so many questions. I wonder if he spared no expense to make this video. Was it shot in amazing lighting with rose pedals & silk sheets? Did he have multiple angle shots? Did the woman in the video know?  Alright, who am I kidding? We can all probably assume he hired a prostitute and filmed it on a cell phone. 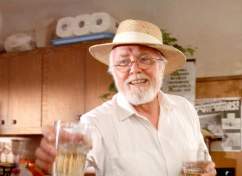 I spared no expense!

I’m sure going through this situation is no picnic for Anusha. On the bright side, this should at least erase any possible doubts regarding if she should seek a divorce.