King Cohen is a documentary about director, writer, & producer Larry Cohen. However, it’s much more than that. It’s also great insight into the evolution of the industry.I would first like to say, I really enjoyed writing this review. As someone who admittedly wasn’t too familiar with the career of Larry Cohen, I found myself very neutral. Some early reviews obviously came from fans of his work. This can make the review somewhat biased. The reviewer is then more likely to write a love letter about the person, & not necessarily review the documentary itself. That being said, let’s get into this.

Many would point to Larry as the father of the Blaxploitation genre, and creator of several noteworthy B-Movies that pushed the creative boundaries of film making.

Everything in this documentary is told through the perspective of Larry, & several other prominent people in the entertainment industry. It certainly enforces the notion that Larry has a place in Hollywood. If you don’t know who he is, seeing J.J. Abrams and Martin Scorsese talk about him, certainly makes a statement to the viewer that you should!

The documentary has a nice flow as it smoothly transitions from his early life and love for the entertainment industry, to discussion of the films that he wrote, produced, and or directed throughout the decades. With so many different aspects of film making attached to his career, it must have been quite the challenge to figure out what should be included, & what should end up on the cutting room floor.  Luckily, the content feels balanced. Also, the editing is solid. Thumbs up! 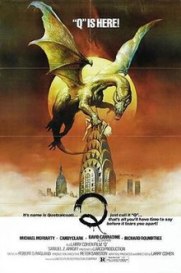 As it continues on, I found myself not only more interested in his career, but also interested in the evolution of  the industry itself.  Today, it would be impossible to get away with a lot of the things Larry got away with. For example, during the filming of Q (1982), people legitimately ran like hell on the streets of NYC as bullet shell casings rained down from the Chrysler building. Extras (who were real maintenance workers) fired automatic guns (obviously blanks) from steeplejacks (almost like a scaffold) from several stories up along the skyscraper. Director John Landis was filming Trading Places a few city blocks away. He witnessed the pandemonium first hand. Police officers on his set were called over to the Chrysler building. They thought a legitimate attack was happening. Could you imagine that scenario today!? It could never happen. The documentary has a few stories that fall under this category.

I do have a few small complaints. They briefly mention Larry’s first low paying job at NBC. He talks about constantly writing and handing scripts to anyone above him. He hoped his determination would win people over, and someone would eventually give him a shot out of pity. I really like this determination factor. People like Larry are obviously persistent. If any existed, it would have been great to hear a personal story regarding how far Larry would go to try to get his scripts read. I’m sure he hilariously annoyed a few employees at such a young age. This is a small complaint though.

My only true complaint comes towards the end of the documentary. It start to feel a bit repetitive. How many different ways can someone mention how Larry does things his way? It’s a true statement, but it’s constantly mentioned in various ways.

In the end, I need to ask myself three questions regarding this documentary. Did it educate me about Larry Cohen? Does it make me want to see some of his films that I’ve never seen? Is it entertaining? For all three, the answer is yes! King Cohen is a solid documentary that provides great insight into the history of this film icon throughout the decades.

Look for the documentary to be released in the U.S. on July 27th.

+ Is about Larry, but also the industry over the decades.

+ great collecton of interviews from varous people in the film industry

+ With Larry being involved in so many different aspects of the film making process, the documentary feels balanced.

– Towards the end, it starts to sound a little repetitive. Larry only likes to do things his way. Yes, we know. We’ve heard this mentioned in many different ways throughout the documentary.

Like Loading...
‹ Four ways I hope they don’t f*ck up the next Robocop movie.
My take on possibly the worst 90’s television show ever made. (Whirlwind YouTube video) ›