I think the concept of Escape Plan is perfect for the action genre. The first film starred Sylvester Stallone & Arnold Schwarzenegger. On the surface, it seemed like a mindless action movie. However, I was surprised to find it also had half a brain too.  Ray Breslin (Sylvester Stallone), has a made career out of testing the security within maximum security prisons. He does this by being inserted into the general prison population. Once processed in, he tries to break out.  In Escape Plan 2: Hades, “his most trusted operative, Shu Ren, is kidnapped and disappears inside the most elaborate prison ever built, entirely computerized and constantly changing shape, Ray must track him down with the help of some of his former friends.” (IMDB)  Can this film compare at all to the first film? Let’s just say, Arnold was smart to sit this one out.

We’re already starting off on the wrong foot when the film is a direct to video release. I understand why though. Escape Plan wasn’t a big hit in America. It made good money in foreign markets though. As a result, it try’s to capitalize on it’s international success by adding Chinese actor Xiaoming Huang. Huang is truly the star of this film. Seeing Stallone & Bautista on the front of the movie poster feels like a gimmick.

While Stallone might have top billing, he doesn’t feel like a big part of the film. Today, actors don’t need to film scenes together as frequently. One actor could have filmed their part weeks ago. That’s the beauty of editing. It makes everything fit naturally. Nothing feels natural about this! With the exception of one action sequence, his scenes feel very dropped in. I don’t think it took long to film his scenes at all. He also seems like he’s just going through the motions. He’s old (72 in July). How the hell does he expect to get through filming another Rambo & Expendables film? David Bautista (Guardians of the Galaxy, Avengers: Infinity War) barely lifts a finger. Most of his scenes feel inserted too. He shoots off a gun a couple times, & tosses a couple punches. I wouldn’t be surprised if he and Stallone joked about how this was the easiest paycheck they ever earned.

Ok, lets talk about this prison itself. HAHAHAHAHA, at least the prison in Escape Plan seemed somewhat plausible. This A.I. prison is ridiculous. On certain days, prisoners are forced to fight each other in the central area of the prison. It’s called “the zoo.” If you win, you are given a couple hours in “the sanctuary.” You can relax, read a book, or paint. Afterwards, you return to your cell. That’s about it. 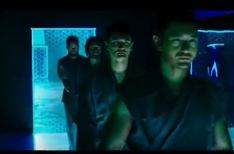 The cell doors themselves are very impressive! They are generated by some kind of laser field. This movie doesn’t take place in the year 3000. That’s some impressive shit you created. Why build a prison when you can reinvent how a door is made? You’d make a killing.

In the end, Escape Plan 2: Hades just doesn’t cut it. Some of the fighting that Xiaoming Huang brings to the film is cool, but not enough to carry the film. Maybe Escape Plan 3: Devil’s Station will be better. Yup, we aren’t finished yet. It was already announced.

+ Watching the inmates try to form some kind of escape plan

Like Loading...
‹ Marvel fan has seen Infinity War 100 times!
Venezuela’s government claims power outages are due to earth moving too close to the sun. ›