Annihilation is a 2018 sci-fi film starring Natalie Portman. While this certainly isn’t the type of movie for everybody, it’s enjoyable if you know what kind of movie you’re getting yourself into, but has some issues that prevent it from becoming truly great. I can see how some might be disappointed in this movie. I think it was marketed wrong. The trailers made this look like it could be some kind of sci-fi/action flick. If that’s what you were hoping for, you’ll be disappointed. While it definitely has some moments of action, they don’t last very long. This is more of a sci-fi/drama.

Something from space (possibly a meteor harboring alien life) crashes through a light house. As a result, it creates a kind of bio-dome effect around the impact region that is slowly expanding over the years and swallowing everything around it. This slowly growing stretch of land is called ‘the shimmer.’ Military teams have been sent inside to investigate the source. Nobody has ever returned. Lena (Natalie Portman) is a biologist. She is part of an expedition team going into ‘the shimmer.’ Basically, everything goes bonkers within the miles of land inside this slowly expanding bubble. Electronic communication doesn’t work, and compasses go ape shit.  Furthermore, the DNA of anything within mutates over time. These effects get more drastic and severe the closer you venture toward the source. No, you won’t become one of the x-men with cool superpowers! You’re more likely to turn into a plant, or fuse together with some kind of animal. It’s ecosystem that’s pretty much rewriting everything. Nobody can make heads or tails of it. That’s pretty much all I’ll say. 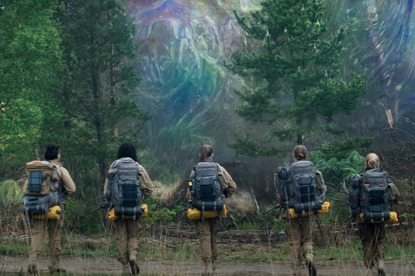 Nope, this isn’t Ghostbusters. Prepare to enter ‘the shimmer’

As I mentioned above, the action is sparse. Expedition members get killed one by one, but the film is mostly about the team trying to understand what they are dealing with, and figuring out a way to stop ‘the shimmer’ from spreading any further.

While the team of five tries to science the hell out of this thing, I was caught off guard by some of the disturbing imagery. It didn’t bother me. I just didn’t expect it. Some of the scenes show the extreme effects that this place has on the human psyche.

While a lot of these concepts are great, the film has some short comings. The dialogue doesn’t always feel right. It’s subtle, but a few times I noticed characters state the obvious in a way that no real person would. The conclusion also leaves too much open for interpretation. I’m ok with this technique if used correctly. The film Inception used it perfectly! The ending didn’t feel tacked on, or like a cheap way of backing out of the story.  In Annihilation, I need to connect too many of my own dots. It feels less like leaving things open for interpretation, and more like lazy writing.

Annihilation is a decent movie that could have been awesome. It has so much potential. Unfortunately, it really chokes in its conclusion.

+ The up close creature scene was very eerie

– It leaves too much open to the point where it feels like lazy writing.