Home › I can't believe its in the News! › People can be stupid. Woman became drug smuggler to get more ‘likes’ on Instagram.

People can be stupid. Woman became drug smuggler to get more ‘likes’ on Instagram.

This week, The “Cocaine Babe” got a seven year sentence for trying to smuggle $30 million worth of coke into Australia in 2016. Her motivation wasn’t money. She did it for “likes and attention” on Instagram. Plus, she was carrying out her ‘Sugar daddy’s” orders. (source)

Melina Roberge is a dumbass. In 2016 She and her three accomplishes should have done some research before attempting this slapped together operation. If they did, they would have realized Australia doesn’t fuck around. They’ve caught people who have tried harder for attempting to smuggle much less. That being said, 200 pounds of coke in roll on suitcases isn’t going to cut it. Ya, that should throw authorities and dogs off.  (source) 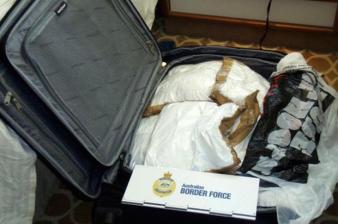 Initially, I thought the claims of her being “seduced by lifestyle and the opportunity to post glamorous Instagram photos from around the world,” was some kind of cover & not a true motive for doing this. Then, I read about the horrible plan & carrying out the orders from her “Sugar Daddy.” When you lump all this together, it’s easy to figure out she isn’t very bright. So, I changed my opinion on that. With the craving for this kind of attention, I’ll also assume she has major “daddy issues” too.

Now, not only is she going to jail, but authorities have probably combed through all her “glamorous Instagram photos from around the world,” and noted those locations as potential trafficking routes. Good job Melina!