Home › I can't believe its in the News! › Flat earth community claims SpaceX launch was a hoax.

Whenever I need a good chuckle, I read some of the crap that the flat earth society is putting out. Recently, SpaceX launched its Falcon rocket into space. The payload included owner Elon Musks red Tesla roadster with a dummy inside it. Of course, people who support the flat earth theory are claiming it’s a hoax.

On the list of potential conspiracy theories, the earth being flat is very much at the bottom. Typically, I don’t care what people believe. However, when people protest something that the Greeks could easily prove 2,500 years ago without fancy satellites, it’s just further proof that the human intelligence is sliding backwards. That ticks me off a little. (source)

Some Youtube and flat earth people have pointed out several things about the camera feeds aimed at the Tesla Roadster & dummy. Unlike most people with beliefs, I’m going to keep an open mind and look at some the things that some have pointed out and see if there is any truth related to the claims.

Oh boy. We are really off to a flying stop. Common, really? The earth is not a perfect sphere. I learned that in High School. Hell, I might have even known that in middle school. It’s technically considered an oblate spheroid, & it does bulge. 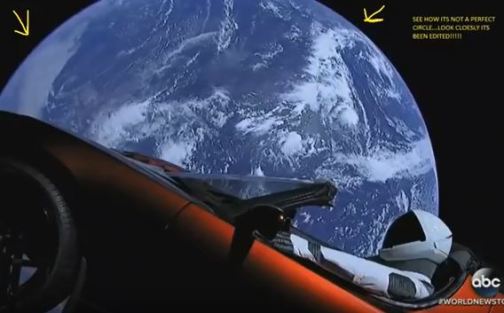 People also seem to forget the Earth’s surface is 71% water. Plus it’s not like land would be easy to see from this distance. In this feed below you see some though. Looks like Australia maybe. This could easily be obstructed by clouds at this distance. 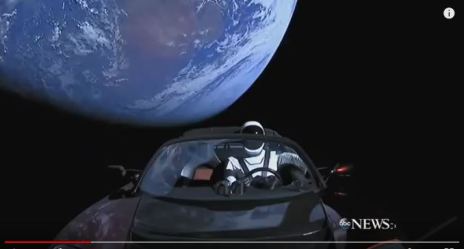 This has to do with exposure. The stars are too dim for a the camera to pick up. This is a video camera, not a space telescope. Also, these stars are light years away! When you have a brighter object up close in the foreground, it makes it nearly impossible to pick up dimmer objects in the background. Our eyes work in a similar way. Go to an area with a lot of light pollution and look up. I bet you don’t see a lot of stars. Now, go to a very dark place where light isn’t a factor. Boom! Lots of stars!

A lot of what people are preaching regarding this being a hoax can easily be explained if you actually look into it.  I don’t expect the mindset of these people to change though. Once someone believes something, they quickly dismiss anything that might go against it. I can admit, I do believe our government has kept a lot of information from the public regarding outer space. However, the earth being flat isn’t one of them.