Over 20 years later, revisiting Goldeneye 007 for the Nintendo 64. Has it aged well?

I don’t write much about videogames, but since this game was such a big deal I couldn’t resist. If you were a teen/preteen male in the 90’s, you either played, or were around friends who played Goldeneye 007. That was a fact! It was released in 1997 for the Nintendo 64. Over twenty years later, I’m about to re-live those teen years. Let’s see if it’s as good as I remember it.

This was before online gaming. If you wanted to play against friends, they needed to come over. A part of me misses that. It was fun getting a group of friends together for something like this. We would talk shit, share some laughs, & stuff our faces with food.  Today, you toss on a headset and meet in an online lobby. While obviously more convenient, face to face was always more fun. Goldeneye truly brought people together.

Not knowing if the damn thing still works, my friends and I fire up an old N64. To really create the full effect, we also dug up an old Sanyo TV that was collecting dust in another friends basement. After slapping the cartridge down into the slot, I needed to flip the on/off switch a couple times. It works! I feel a wave of nostalgia as 007 walks on screen.

I immediately notice the graphics look like ass. Obviously, I expected them to look dated and bad though. Although, some games do age better than others. This has aged like a High School prom queen after 20 years of hard drinking. I think it’s because this was the early days of graphing faces of real people onto character models. Look how awkward they look. Why does it look like their heads were bashed in with a baseball bat? I guess I can get bitch slapped without actually seeing my opponents arm too.

Time to kick this up to four player deathmatch! Wow, the four player split screen is nothing like I remember it. This really sucks. I guess when it’s all you had at the time, you dealt with it. You didn’t know anything else. Now that we no longer need this, I feel like I can’t go back. It just looks like a sloppy mess. I have no idea what the fuck is going on. I also feel like some of the maps aren’t big enough for four people. Someone is literally dead in about 10 seconds. This isn’t necessarily a bad thing. It makes you haul ass to find the nearest & best gun, but it sucks when you know for damn sure you’re probably the one who is going to get screwed. 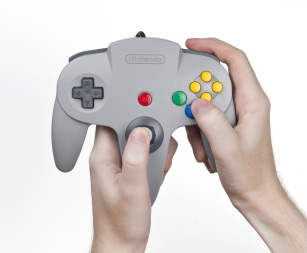 It doesn’t play well either. Granted this control stick I’m using is about as worn out as a veteran prostitute, but the controls themselves aren’t as comfortable as I remember them. I use my left hand to grip the middle of the controller. I use my thumb to move the control stick. Then, I need to use my  index (trigger) finger to shoot using the Z button behind the controller. My right index finger is used for the R button at the top of the controller to aim. My thumb is for A & B buttons to switch weapons or reload. Everything else doesn’t really matter. This feels so damn awkward now. How was I use to this!? I can’t aim for shit anymore.

I obviously didn’t expect the game to hold up, but I didn’t expect it to have aged this bad either! I learned a very valuable lesson today. Sometimes it’s best to leave things as your remember them.

Categories: I can't believe its in the News!, Rants about Stuff!