Home › I can't believe its in the News! › Three women get stranded on tubing trip because they thought the river ran in a circle.

Three women get stranded on tubing trip because they thought the river ran in a circle.

On Tuesday, three women decided to take a fun tubing trip in the Muskegon River in Michigan. They were told by a stranger on the bridge that the river ran in a circle. Yaaaa, not true. They were rescued A DAY later.

The stranger who told them the river runs in a circle is either dumb and truly believed the river functions like a water park, or was totally messing with them. Since Michigan is a toxic cesspool that doesn’t exactly turnout the smartest people, I’m going with the dumb person theory.

Once it started getting dark, the women got off the river and onto the bank where they screamed for help. They were eventually rescued 20 hours later by a fisherman who heard them. (source) 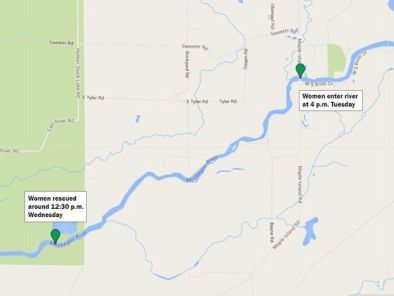 That’s um quite the circle

Wait, they’re all their twenties? This makes them look even worse! Someone should tell them about something called the ‘internet’. You’re actually on it right now reading this. Amazing isn’t it? This brain trust never thought to look at Google maps before attempting this? Even a teenager has enough smarts to do that. This was also their first tubing experience & nobody had a cellphone. Talk about doing all the necessary leg work ladies to insure everything would go off without a hitch.

Like Loading...
‹ A new trend of women putting glitter in their vagina has doctors concerned.
Groom has seizure during wedding ceremony, bride decides to marry guest instead. ›