With the sequel 50 Shades Darker now in theaters, I figured I would watch the first film and see what the hell the big deal is. I have a full bottle of whisky ready. (Spoilers obviously) I am doing this in two parts. I need some in-between time to regroup. I originally planned to follow my usual format and just grind through this film, but that attempt failed. I’ve never read the book, but this must be a horrible adaptation. Enjoy part one.

Anastasia gets stuck with going to the Grey House building to interview CEO Christian Grey for an article. Christian is played by…um..um. Who gives a shit. I don’t see him having much of a career after this and don’t feel like searching for his real name. Her roommate was the one who should have been conducting this interview, but she probably heard the rumors about him and didn’t want to get sucked into the mess that is about to unfold. Anastasia asks him some simple questions. We can get a bit of a feel for the type of guy Christian is. This is painful to watch. I don’t know if it’s the script or the acting, but this guy sucks! Anastasia fumbles around like a nervous little girl. Christian escorts her to the elevator. Both Christian and Anastasia each get a weird facial camera close up saying each others names as the elevator door closes. What the hell was that all about?

So what does a girl named Anastasia Steele do for work? She works at the hardware store? Sure, why not! While at work, Anastasia talks to her mom on the phone. Get this! Her mom tells her that she can’t make it to her graduation because her current husband broke his foot. Jesus Christ, he isn’t terminally ill in a hospital bed. It’s just a broken foot. You suck mom! What a shitty parent. No wonder she is about to end up in the hands of a sadist. After that laughable conversation, Anastasia turns down an isle in the store & POOF! She is spooked to see Christian standing mid isle gazing at her. Fucking psycho! He has her cut him some rope. As she is doing that, he jokingly asks if she was a girl scout. WTF? She isn’t tying knots or anything. She just pulled a rope and cut it. That’s nothing special. He also purchases some items that would be a red flag to any normal woman. Not dumbass Anastasia Steele though. She is getting butterflies about him. While at checkout, Christian flashes a look of frustration at her male coworker who asked if she needs help bagging. 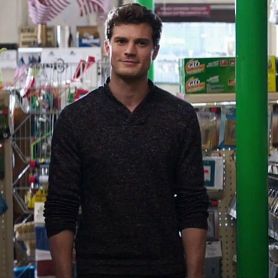 Oh, hello. I’m just gonna stand in this isle and stare at you like a weirdo.

I apologize for the profuse amount of swearing that is going to take place as I slosh through this, but Christian is creepy as fuck! I wonder if the actor is trying to channel Christian Bale’s performance as Patrick Bateman in the film American Psycho. That’s exactly what it feels like! Not to mention, I feel zero on screen chemistry between these two. In fact, if my male sounding GPS & my Amazon Alexa could talk to each other, they would sound like they have better chemistry than these two idiots! Also, at times they deliver their lines like someone is holding them off screen to read aloud. I don’t know how much longer I can continue to sit through this.

Christian poses for a photo shoot with Anastasia’s friend Jose. Jose is a slick photographer who his trying to work his way out of the friend zone with Anastasia. Good luck with that. Both Anastasia and her friend Kate are present at the shoot. Kate makes a comment how Christian hasn’t taken his eyes off Anastasia. She’s right. His creepy serial killer gaze is definitely fixed on her. Instead of being freaked out, they both giggle like school girls. Anastasia mentions how she is getting coffee with him after the shoot.

They get coffee and have small talk. Christian says he doesn’t “do the girlfriend thing”.  As she is about to cross the street, Anastasia almost gets hit by a person on a bicycle, but Christian pulls her to safety. A bicycle, really? They couldn’t have made it a car? Creepy Christian then puts his hand on Anastasia’s cheek and tells her that he needs to let her go. Let her go? What the fuck is going on? It’s just coffee dude. Plus, you guys are still practically strangers. She should tell him to get his hands off her face. You fucking nut.

Kate & Anastasia celebrate the end of their finals at a bar with some friends. While waiting in line for the bathroom, Anastasia calls Christian to tell him she’s had enough of his stupid games. Wow, good for her. Finally, she is showing signs of brain activity. Christian then sounds like a cross between a concerned parent and possessive nut case. He asks her if she has been drinking & demands she go home immediately. After asking her where she is, she hangs up the phone without telling him. You go girl! Christian then immediately calls her back and tells her that he knows where she is and is coming to get her. WHAT!!? Anastasia then goes outside with Jose following her. He confesses his feelings and tries to kiss her. At that moment, Christian teleports in and pushes Jose away from her. No way Jose! hahaha Anastasia pukes and passes out. Christian takes her away leaving Kate and Jose behind with Christians brother.

Super cock block for the win.

Are you shitting me! So much is wrong with everything that just happened. For this to be remotely plausible, he either… A: had her tagged with a tracking device during a previous encounter  B: used some NSA technology to get her exact location. Either way, it’s fucked up. If he did use some NSA technology to find her, this would clearly violate tons of privacy laws. Good job Christian! You just broke the law to stalk a college student. She probably isn’t smart enough to question this though. Also, how did he arrive so fast? Some time must have lapsed between the bathroom and going outside, but it seems pretty damn quick. I know he’s Christian Grey, but he isn’t Superman!  Her friends suck too. Why are you letting this guy take your drunk friend away? Doesn’t she belong in a cab going home with her friends? I’m blowing through my whisky quicker than I anticipated.

Moving on, Anastasia just woke up in Christian’s bed wearing different clothes. She takes some pills next to the bed that instruct her to do so. Of course she doesn’t question it. She just tosses them back and drinks from a glass that instructs her to do that also. Ugh, if she is going to act on every piece of information written in front of her, I want to put her near a sign by a cliff that reads “jump off this”. Christian gets out of a potential rape accusation by explaining he changed her out of her clothes because they were covered in vomit. He brings her some breakfast. The filmmakers try to make toast look sexy by having Christian take a giant bite out of a piece.

She really isn’t going to question how the hell he found her!?  Christian tells Anastasia that he won’t touch her without written consent. What is she 16 and needs a permission slip from her parents? Do people talk like this?  Why is she still talking to this nut? Written consent? They both get in the elevator so Christian can take her home. This is when he gets all cool and says “Fuck the paperwork”. They both start making out like a bunch of teenagers. The elevator opens with a bunch of businessmen looking at them. Was this an attempt at humor?

This is all I can pretty much stomach for now. I just can’t do this entire movie in one sitting. Part 2 coming soon!