Home › I can't believe its in the News! › Man has penis amputated after getting it stuck in a bottle.

Man has penis amputated after getting it stuck in a bottle.

Just to save some of the best for last, I decided to hold back some of the more ridiculously hilarious over the top news articles from 2016 that really capture human stupidity at its finest moments. This is one of them.

I guess some guys really will stick their dick in anything. Back in October, a man in Honduras decided to relieve his sexual frustration by sticking his penis in a bottle. FOUR DAYS LATER, he went to the hospital because he couldn’t get it out! As a result, his penis literally started to decay and needed to be amputated. (Source)

I know something like this is embarrassing, nobody likes the hospital, but needing four days to finally man up and go is a bit extreme. What the hell was this guy doing for the three previous days!? Was he walking around with that bottle attached under his pants while his penis was suffocating to death?  He couldn’t break or punch some holes in the bottle to get the little guy some air? How did he go to the bathroom? 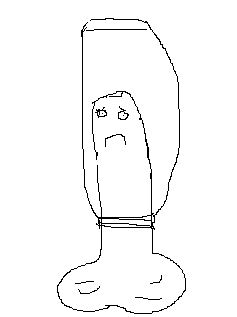 Due to the how graphic & disturbing the real photo probably would look, I decided to sketch this. This little guy must have been so scared knowing he was about to suffocate to death.

The article mentions the man was not married nor had a girlfriend. What a shock! He also will never be able to have sex ever again. That’s not necessarily a bad thing. It doesn’t matter that he is 50. Since men can produce sperm until the day they die, there is always a chance that he could knock up some hussy, even if he had a 0.0000001% chance of doing so. This at least brings that down to 0% and guarantees that an idiot like this will never procreate. Amen to that!