For a few seconds of screen time, major companies like Coca Cola & Budweiser fork over tons of cash to ensure their logo is seen in a film. If the logo doesn’t make it into the film, the movie studio better prepare for court. Such is the case regarding Wulong Karst Tourism. They are suing Paramount for $27 million dollars. They claim to have paid the studio $750,000 dollars to have its logo in the film Transfomers 4. It never made it in. (source)

While Paramount doesn’t dispute leaving out the logo, they gave a hilariously bad response to try and justify how they made up for it. They think since Michael Bay shot a commercial for the company and left behind the sets and props, it should more than make up for it.  Your kidding right? What the hell kind of response is that? I guess the studio thinks the Chinese accept payment in set pieces and garbage? 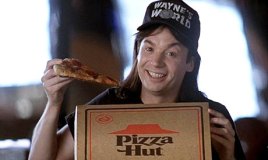 On a side note, It must be really annoying as a director to work around all this product placement bullshit. I imagine a director & editor wanting to cut a perticular shot out of a film that they don’t like, but they can’t because the shot contains a product logo that is paying to be in the film. That shit would piss me off!

Anyway, It finally happend. Product placement in summer blockbuster films has become so saturated that a film forgot to include one. Maybe this will signal to studios that they shouldn’t attempt to cram in every damn company that writes them a check. That would be very unlikely though. When you have a film like Transformers 4 that grossed over a billion dollars worldwide, $27 million seems like peanuts.

Please note, all the articles I write about are based on real media stories. None of these are fake. Since some of them seem so bonkers, I do cross references to make sure it has been reported from multiple sources before publishing. If you believe a story that I have written was fabricated, I would like to know. Please don’t hesitate to comment. -Thanks