Home › I can't believe its in the News! › Four hour street battle erupts during wedding feud.

Weddings are a time for joy and happiness. So what happens when two wedding celebrations in China collide on the same street? Apparently, a four hour street fight with knives and makeshift fireworks!

Tension was already in the air. Both families didn’t like the fact that the other decided to celebrate on that particular day on the narrow road. Then, when one family proceeded down the street and passed under a decorative archway that was built for the other family, it was time for war! (source) 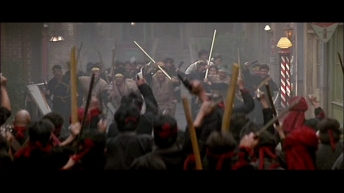 No doubt, this is exactly how it went down!

At least you can say the wedding was memorable. I would have paid to watch this. For several months, I haven’t been able to find anything on television that sounds nearly this entertaining. Of course, it probably looked nothing like I am envisioning it. I am envisioning lots of Kung-Fu and people chucking ninja stars. Basically, I am envisioning it as the closest thing to the 1986 film Big Trouble In Little China as you could get. Don’t lie! You know your envisioning it the same damn way.

Please note, all the articles I write about are based on real media stories. None of these are made up. Since some of them seem so bonkers, I do cross references to make sure it has been reported from multiple sources before publishing. If you believe a story that I have written about was fabricated, I would like to know. Please don’t hesitate to comment. -Thanks

Like Loading...
‹ Cop blows up court room during grenade demonstration.
Remember when The Sharper Image sold angus beef and called it “Trump Steaks?” ›